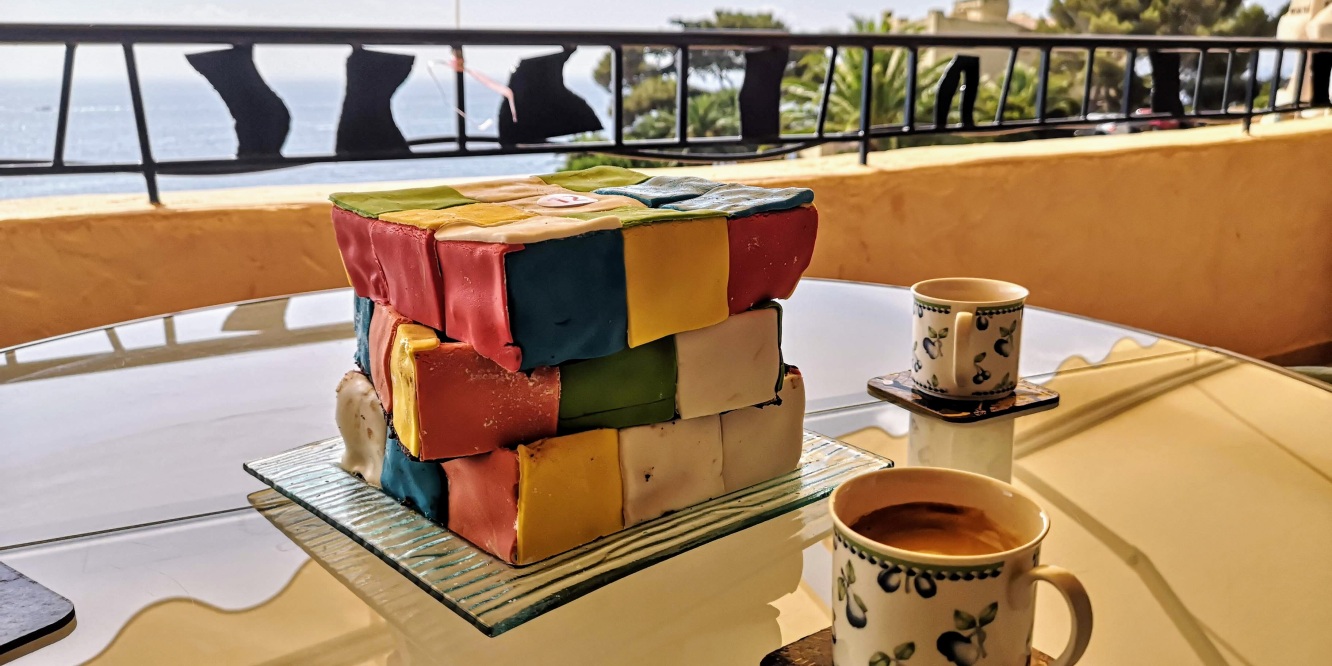 It was Simon’s birthday yesterday and as this year is all about cubing, yesterday was no exception. It has sort of become a tradition to celebrate his birthday at our uncle’s house in Southern France and start the day with a themed presents hunt (this year, full of cubing trivia). We knew Simon wanted to bake a 3×3 birthday cake long in advance so we came to France equipped with cube-shaped baking trays, colorful fondant and square cooky cutters. We had done our research and conjured the basic design while still at home in Belgium: Simon wanted a cake that could turn along at least one axis.

The idea we came up with was to bake three chocolate-matcha cakes (Simon’s favorite) and set them on chocolate tablets to be able to twist the three layers of the cube. Our favorite Belgian chocolatier couldn’t make chocolate tablets in exactly the size we needed so we ended up buying smaller ones and melting them au bain marie to sculpt new larger tablets, which didn’t go all that well. We only managed to make one proper tablet, the other one crumbled (probably because we used three different kinds of chocolate). Another tricky part was to make sure we distributed the dough equally among the three layers as we only had one baking mold. We used too much dough for first layer and had too little over for the last one, so we had to top it up with Russian buttercream. Our next challenge was making sure we had enough fondant as we had to mix colors. The cake is a real solvable scramble that Simon generated and revealed just before we started decorating. We were afraid we would’t have enough yellow fondant but we were lucky: three yellow squares in the scramble ended up on the bottom face that we didn’t have to decorate.

Long story short, even baking a cube involved a lot of problem solving and was a puzzle on its own, but we have managed to whisk up a pretty believable (and yummy) Rubik’s cake! Scroll down to the bottom of the post if you want to know the recipe.

Simon’s friends Abhay and Sarvagya prepared a beautiful birthday surprise for him, an animated webpage. They worked on it for three days, the html alone had something like 500 lines of code! Just look at these fun balloons floating in the air (no google images, all created from scratch) and the gradient background!

For the three layers of the cake, we used our favorite Japanese chocolate-matcha cake recipe. The ingredients are per layer, so you will need three times as much for the whole cube:

Warm up the oven for 165° Celsius (ca.330° Fahrenheit). Warm up the milk until it’s lukewarm and divide it into two bowls (pour 2/3 into one bowl and and 1/3 into the other). Whisk the chocolate powder into the large portion of milk and matcha powder into the smaller portion and set both aside. Take a big mixing dish and mix together in this order: butter, sugar, vanilla extract, eggs (beat/whip the eggs up with in a separate dish first), cream. Add the flour last. Separate your dough into two bowls again, 2/3 into one bowl and 1/3 into the other. Add the chocolate-milk mixture to the first bowl and the matcha-milk mixture to the second one and stir carefully. Pour most of the chocolate dough into the mold, then pour the matcha dough, and then the rest of the chocolate dough in top. Bake for about 45 minutes or until a wooden pricker you poke the cake with comes out dry.

After you have baked three such cakes, let them cool down and mount them on top of each other, spreading Russian butter cream generously in between the layers and all across the cube’s faces. The Russian buttercream recipe is very simple: just whisk up 200 g very soft butter until it turns almost white (keep whisking for 5 minutes), add three big table spoons of unsweetened chocolate powder, a pinch of salt and some vanilla extract and one can of condensed milk (about 350 g). Make sure the cream is not too liquid (if it is, set it in the fridge for 30 minutes to stiffen up).

We used this baking mold by CRYTIVE:

If you want a turnable Rubik’s cake, put chocolate tablets in between your cake layers (the tablets should be around 20×20 cm in size). You can make them yourself by melting good quality chocolate au bain marie, pouring your melted chocolate into a 20×20 cm baking mold and setting it in the fridge for about 30 minutes.

You will need 45 squares in total but how many of each color will depend on your scramble. Below are a couple of pictures of our cake decoration process from the night before Simon’s birthday.

One Reply to “I want a Rubik’s Cube Cake for my birthday!”