We had such a genuinely rewarding homeschooling experience yesterday when we took up Physics Girl’s challenge to recreate the Weissenberg effect – a phenomenon that occurs when a spinning rod is inserted into a solution of elastic (non-newtonian) liquid.

Our first attempts to make slime following Physics Girl’s recipe (1/2 cup PVA glue, 1/2 water plus 1/4 tsp borax dissolved in another 1/2 warm water) failed so we returned to the department store to get starch, a different type of glue and anything else that might help. Did we use the wrong glue? What is borax (originally, we thought it was the same as the salt used to clean the dishwasher)?

After we started asking around, the shop assistants threw in a couple of handy tips (like getting some fluid used for cleaning your contact lenses as it contains something like borax, borate buffers, and mixing that with glue and shaving cream). At the drug store, we got warned about the dangers of pure borax powder if used in large quantities (skin burns), but did manage to get a tiny bottle of the stuff after we assured that it was for an adult supervised experiment. With all this useful info and terribly tired, but fully equipped we returned home and resumed our attempts at mixing perfect slime. You can see for yourself in this unlisted video how we went about it.

Eventually, we ended up adding twice (in not thrice) the amount of borax to finally froth up the right consistency non-newtonian fluid and it just worked!

(Instead of being thrown outward, the solution is drawn towards the rod and rises up around it. This is a direct consequence of the normal stress that acts like a hoop stress around the rod).

Simon wrote: In this video, I make slime “climb” up! It’s because of the “viscoelasticity” of the slime.

Correction: I’ve made a mistake when I said “times H2O”. The dot in the formula didn’t mean “times”, it meant ion.

The borax formula was indeed what Simon called “a mouthful”: Na2[B4O5(OH)4]·8H2O where the dot refers to the elements in square brackets all forming the [B4O5(OH)4]2− ion.

So what is borax? It’s a mineral, a salt of boric acid, also called (di)sodium tertaborate, usually possessing a crystal water content (although the commercially available borax is partially dehydrated).

Thanks to more borax, check out how high our fluid rose – it came out the other side of the straw! 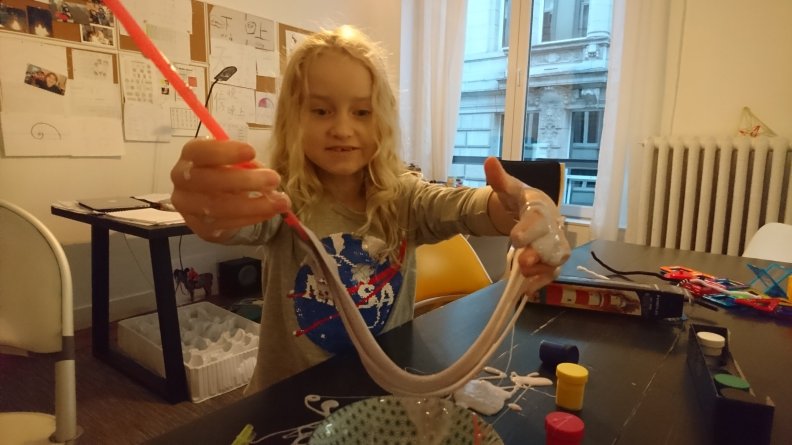