Last Friday Daniel Shiffman was finally back with his weekly livestreams! Simon was delirious with joy that he could be part of the team again and weeping and panicking every time Daniel experienced technical difficulties. During the days that followed, Simon made his own two versions of the coding challenge Daniel presented in the livestream and shared those with his colleagues on GitHub and the Slack channel: “I made *two* versions of the acrostic coding challenge. Link to a github repo: https://github.com/simon-tiger/acrostics (Links to both of the versions in the README).

The coding challenge was part of Daniel Shiffman’s Programming A to Ze course at NYU (a course focusing on analysis and generation of text-based data) and was about creating an Acrostic machine – an algorithm that would use a source text to create a “poem”. Every word in the poem would begin with the consecutive letter from a word one enters.

One version that Simon created uses an API as the source text:

In the second version, the user can type the source text (like in the screenshot below), use a text sample or drag a source text file into a special dropbox:

Screenshot of the second version (with drag and drop): 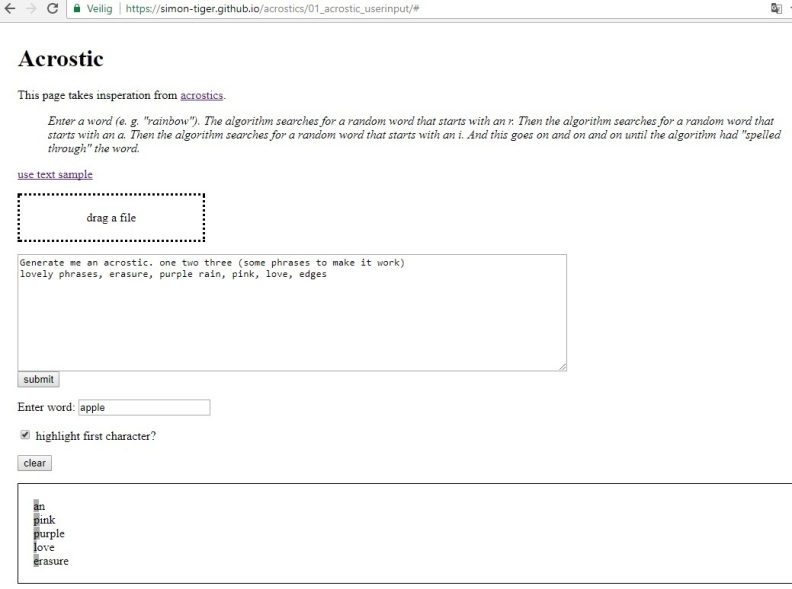 Simon making his versions of the Acrostic machine: